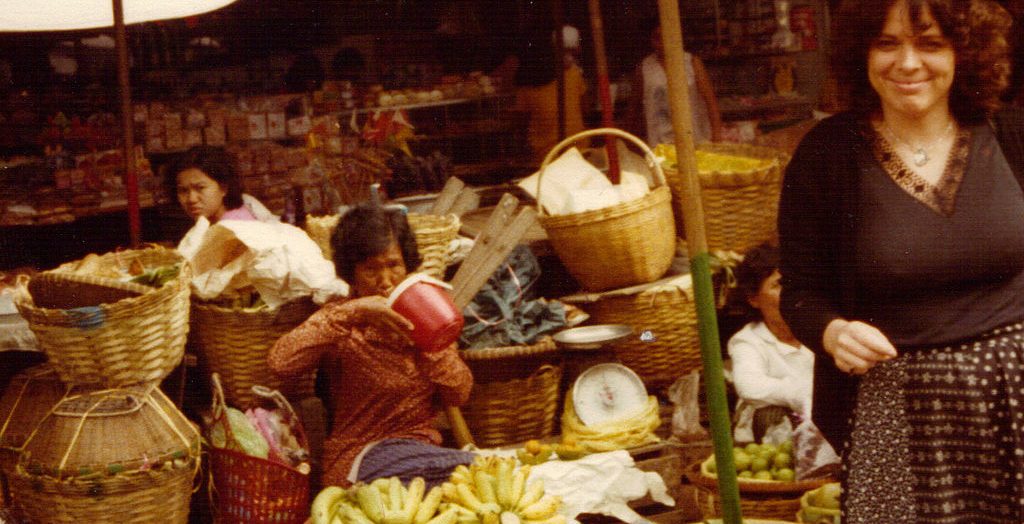 Nineteen eighty-two. Or – Thai-style – 2526. The year BAMBI was born. Cast your mind back – can you recall 1982? What were you doing then? What was making headline news? By Ann Patrick / Photo by Renate Schediwy via Wikimedia Commons

Amongst events too numerous to detail here, Wikipedia reliably informs me that in 1982 the United Kingdom and Argentina engaged in a brief, but deadly, war over the Falkland Islands, the Soviet Union and its Allies remained firmly closed off behind the Iron Curtain and it seemed to be the year of the plane crash, with several fatal crashes, including Pan Am Flight 759 (with crashed just after take-off with a loss of 153 lives) and Japan Airlines Flight 350 (which crashed in Tokyo Bay). On a lighter note, Michael Jackson released Thriller, the biggest selling album of all time, the first compact discs were released to the public in Germany, Spain hosted the FIFA World Cup (and Italy won it), Gabriel Garciá Márquez won the Nobel Prize for literature, and Chariots of Fire claimed the Oscar for Best Picture. One final fact that caught my eye and caused me to raise an eyebrow (especially given that most of you reading this are probably female…) was that for the first time, the recipient of Time Magazine’s ‘Man of the Year’ title was, in fact, not a man, but… the computer! Here in Bangkok, the Dusit Thani was still one of the tallest buildings in town and Central Lad Prao opened its doors as one of the first shopping malls and department stores in Thailand. And another smaller, but for many no less significant landmark, Cheap Charlie’s Bar (Sukhumvit Soi 11), was first established by a partnership between Charlie and his brother, Satit, with an initial investment of only ten thousand baht. The counter was acquired for free and Charlie started selling beer at 20 baht a bottle. In the beginning, animals such as squirrels, hawks, and even bats were kept to entertain the customers and Charlie acquired strange and curious artifacts from provinces around Thailand to decorate the bar.

A long time ago

So, as the events above have highlighted, 1982 feels a long time ago.  For those of us who remember it – and, I have to confess, all I remember clearly about that year is that I started school – life was very different everywhere. The world was undoubtedly a ‘bigger’ place: fewer people travelled long distances, communications were harder, and it is probably fair to say that we were all generally less aware of what was going on elsewhere in the world. And yet, back in 1982, there were plenty of foreigners living and working in Bangkok, many of them pioneers, trying to make life easier for the families who found themselves far from home. People like Mel Habanananda, the founder of BAMBI. As Mel goes into the details of BAMBI’s life story elsewhere in this edition, I won’t touch on that, but instead, I invite you to think about other aspects of Bangkok life in 1982 and compare it to what we have here now.

Distance from home and staying in touch

For many expats in the early 80s, Bangkok would have felt a long, long way from home. Foreign travel – or at least, long-distance foreign travel – was less common (the more adventurous of my UK school friends perhaps made it to America for a holiday, but much further than Europe was unusual). Now, Thailand sees over 14 million visitors a year, a figure which has increased exponentially since 1982. Of course, one of the biggest factors in making the world feel smaller must be the development in communications technology. Email, the internet, mobile telephones – none of these existed in 1982. Long-distance communication didn’t amount to much more than prohibitively expensive telephone calls (from a land-line, of course), letters (just how reliable was post from far-off lands in those days?), or telegrams. But now, how often do your relatives and friends use Skype to keep up with your children’s daily developments and activities? No more waiting weeks for a letter with a few precious photographs (in the days before digital cameras!). Brief snippets of family news can be relayed instantaneously by text message, wherever we are. If we could go back to 1982, this would have all fallen into the realms of science fiction. These same communication technologies make it so much easier to settle in somewhere too. Before I came to Bangkok, the internet had already led me to BAMBI, helped me start our housing search and given me an idea of living costs and quality of life. In 1982, newcomers would have relied on word of mouth – and indeed, knowing someone who knew where to turn for this information. The Bangkok Guide already existed, but how to find out about it if you were not following in the footsteps of other expats? The internet and cable TV meant we are also able to keep up with what’s happening in the news and don’t even need to miss out on our favourite TV series or international films. In 1982, video cassettes would have been the only way to see TV programmes and films from ‘back home’; no internet downloading or DVDs – pirated or otherwise.

Turn now to thoughts of your daily routine in Bangkok: we all moan about the Bangkok traffic, and whilst there was less traffic 30 years ago, there were not the alternatives to the standard road network: no expressways to shoot into central Bangkok (or out!), no BTS or MRT to avoid Sukhumvit gridlock during rush hour. And as for taxis themselves: whilst many of us have become reconciled to the dangers of taxis without seatbelts and transporting our children without car seats (which I guess was the norm everywhere in 1982), at least we do not face taxis with rust holes so bad you could see the road underneath, wondering if you’d ever make it to your destination. And as for air conditioning – well, it was a huge luxury (think about that next time you are sitting in a taxi in a traffic jam in hot season). In 1982, Villa Market was the only real option for foreigners looking for a (limited) taste of home. As Christiane Limberg pointed out in the January 2012 issue of BAMBI News, we all have cravings for a taste of home from time to time. Now, in Bangkok, it is pretty much possible to get anything we want – within reason! We may balk at the price, but given the alternative would be to board a (long-haul) flight, or await a ‘care package’ from home, it’s not too bad. Bangkok is not so different from any other major city in the world in that respect.

The International Schools Association of Thailand lists 87 schools (covering nursery-age to high school graduation) in Bangkok in its 2010-2012 edition. That’s a lot of choice. Besides schooling in English, speakers of languages including French, German, Mandarin, Malay, Japanese and Korean are catered for. Back in 1982, only seven of these schools were in existence, and several of those were church-affiliated schools. Anecdotally, it seems that many expats opted to send children – particularly those heading towards serious exams – to boarding schools ‘back home’.  No wonder Bangkok is often seen as a ‘family-friendly’ option now. And how did you entertain younger children? BAMBI playgroups were only just starting up. There was no Funarium (or similar), Ocean World, organised activities such as swimming lessons or toddler soccer, without mentioning the myriad seasonal parties and events geared towards children. But the weather was the same… Rainy season must have dragged at times.  As a last resort, at least we now have cable TV with kids’ programmes in English (or other languages); DVDs and the internet fill other gaps in this respect.

I suppose a lot of what is different about being an expat now is down to timing: 30 years is a long time and many things have changed (for the better?) everywhere, not just in Bangkok. But, it all goes to show that those who were here back then and who forged the way for making life more straightforward for foreigners, by starting organisations such as BAMBI, were true pioneers. Of course, the whole subject of living life in different countries and raising ‘third culture’ children is much discussed and debated and there are many who feel that more links to ‘home’ can make it more difficult. And many more people in the world do travel now and experience life overseas, even if just for a short period of time. But, when all’s said and done, an organisation like BAMBI is still invaluable – or surely it would not have reached the grand old age of 30.

The views expressed in the articles in this magazine are not necessarily those of BAMBI committee members and we assume no responsibility for them or their effects. BAMBI News welcomes volunteer contributors to our magazine. Please contact editor@bambiweb.org. Tags:
BAMBI, culture & holidays, lifestyle, Thailand