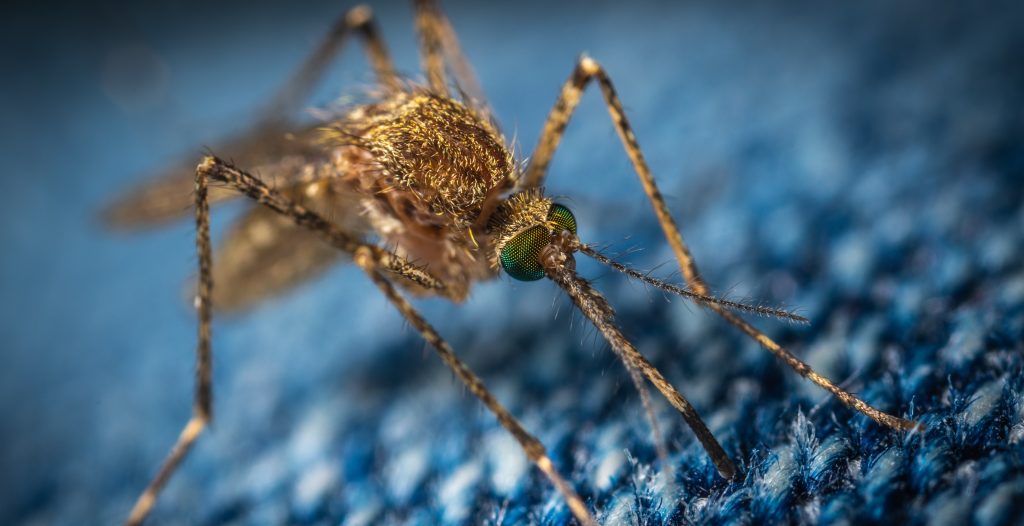 Know the risks associated with contracting dengue fever, how to avoid contracting it, and how to know whether you have symptoms for the more life-threatening dengue hemorrhagic fever.

As rainy season returns to Bangkok so too does the rise in mosquito populations and mosquito-borne viruses. Much has been reported about the potential risks of contracting Zika virus in pregnancy (see BAMBI News, November 2016). Although the potential impact of Zika in pregnancy is serious, the overall risk of contracting Zika is low, with approximately 600-800 reported cases per year, in a population of approximately 66 million.

Unlike Zika, which is typically mild or even asymptomatic, dengue symptoms are more severe…

Dengue fever is much more prevalent in Thailand and although it is not associated with microcephaly or birth defects (as in the case of Zika), it does carry risks in pregnancy for both the mother and baby. Recently the Thai ministry for health has announced a dengue epidemic, with over 28,000 cases reported so far in 2019 and 43 associated deaths.

Early recognition and treatment of dengue in pregnancy are vital for improving outcomes, so it is important that all pregnant women living in or visiting Thailand are aware of the risks and symptoms of dengue and the importance of early treatment.

Dengue is a systemic infection (it affects multiple body systems and organs) and the virus is carried and transmitted by the Aedes mosquito (a vector).

Four different strains of the virus have been identified. Once exposed, you develop lifelong immunity only to the strain you were infected by. Subsequent infections from other strains may be more serious.

The incubation period following exposure from a vector is 4-10 days, followed by 2-7 days of symptoms.

Early recognition and treatment of dengue in pregnancy are vital

Unlike Zika, which is typically mild or even asymptomatic, dengue symptoms are more severe and may also lead to the more serious condition of dengue hemorrhagic fever (DHF), which even with treatment has a 1-2% mortality rate.

Symptoms of both dengue fever and DHF are listed in table 1. 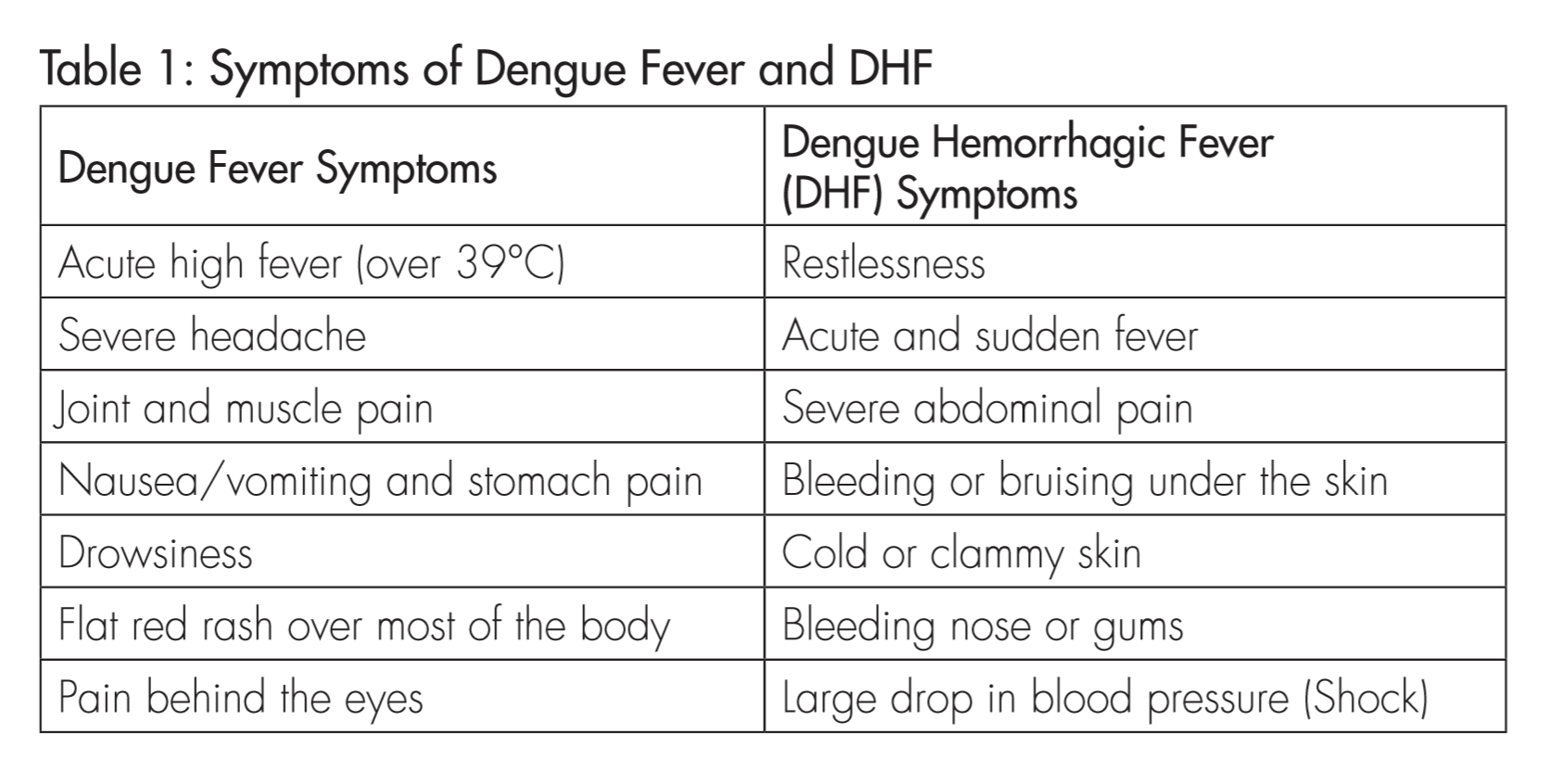 Dengue fever is diagnosed by blood serology tests, which detect recent antibody immune responses to the virus, or molecular testing for the presence of the virus in the blood. Dengue is sometimes confused with influenza, so testing is important to ensure correct treatment.

If you suspect that you may have dengue fever, you should seek medical advice from a tropical disease specialist and have blood tests to confirm infection.

Treatment for dengue fever includes fever management with acetaminophen. You must avoid NSAIDS (anti-inflammatory medications such as ibuprofen) and aspirin, which increases risk of bleeding.

Where DHF is suspected, in-hospital treatment and close monitoring are advised, as the clinical conditions can worsen quickly.

Pregnant women are no more likely to contract dengue than the general population. However, if infected while pregnant, they are at increased risk of developing the more serious complication of DHF, sometimes referred to as dengue shock syndrome (Machado et al, 2013).

Any pregnant woman presenting with a high fever should seek swift medical advice and testing to rule out dengue.

Evidence suggests that the risk of more serious DHF increases in the third trimester. This is likely due to the changes in physiology during pregnancy.

Pregnancy can also mask the symptoms of dengue, leading to a delay in diagnosis and treatment. Pregnant women have 50% extra circulating volume of blood by the third trimester to sustain the pregnancy; bleeding related to DHF can be missed or diagnosed as other pregnancy-related conditions.

In all instances of high fever in pregnancy, dengue testing should be considered, as early diagnosis and close monitoring of both mum and baby can avoid delay in treatment of serious complications (Chaithongwongwatthana, 2017).

Pregnancy complications from dengue: The evidence

When attending a birth where the mother has dengue, the risk of bleeding should be assessed; and blood products should always be available.

There have also been case reports of vertical transmission of dengue from mother to baby. This risk is greatest in the weeks leading up to birth. Babies usually display symptoms of dengue between 5-10 days after birth and serious life-threatening complications include severe jaundice, enlarged liver, internal bleeding, and fluid on the lungs.

Close monitoring of babies born to mothers who contracted dengue in late pregnancy is important, and all parents should be aware of early signs (as detailed in table 1) to avoid potentially serious complications.

There is no cure or specific antiviral treatment for dengue fever. A dengue vaccine, which protects against all four dengue strains (3 doses of Dengvaxia at 6 monthly intervals) is in advanced clinical trials.

It has shown to be effective in people previously infected with dengue but makes those never exposed to the virus more at risk of DHF. As a live vaccine, it would not be suitable for pregnant women (WHO, 2018).

According to the World Health Organization, avoiding dengue infection involves avoiding mosquito bites. Controlling mosquito populations by regular and widespread fogging with insecticide in highly populated and public areas is the first line of defense.

On a personal level, measures include covering up in light-colored long-sleeved clothing, wearing repellent with at least 30% DEET concentration, and avoiding or eliminating areas of standing water such as patio plants or swimming pools, and fitting screens to windows and doors.

Any pregnant woman presenting with a high fever should seek swift medical advice and testing to rule out dengue. Early detection and treatment improve outcomes for both mother and baby.

The content of this article is intended only for information purposes, not as medical advice. As with all health matters pertaining to pregnancy, if you are concerned that you may have contracted dengue, please consult your doctor immediately.

Pictures by Егор Камелев on Unsplash

Originally from Ireland, Emma is a UK-trained midwife who worked in the maternity unit at a busy NHS hospital just outside London. Emma moved to Bangkok with her husband in 2014; they have a 14-year-old son, Toby. Volunteering with BAMBI Bumps and Babies since August 2015, Emma regularly conducts sessions on pregnancy, birth, breastfeeding, and infant first aid. In her spare time, she enjoys baking and Muay Thai and is an active member of her son’s parent group at school.