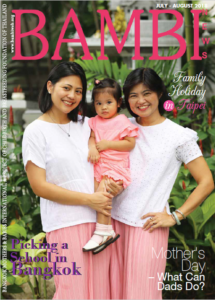 Since I was small, August has always been a month for my mom, as my mother’s birthday is in August. Coincidentally my mother-in-law was born in August as well. So for me, August is the month of moms. Mother’s Day is celebrated in many cultures throughout the world and, as you know, Mother’s Day in Thailand is very special, as it’s on August 12th, the Queen’s birthday! Mother’s Day may be on different days depending on country, but it’s the day to honor the mother of the family as well as motherhood, maternal bonds and the influence of mothers in society all over the world. The modern Mother’s Day began in the US in early 20th century and white carnations were given to moms back then. In Japan, traditionally red carnations are sent as gift to moms. How about other countries? In Nepal, people give sweets and fruits; in Australia, people send chrysanthemums; in Italy, azalea flowers. Finally, people in Thailand celebrate Mother’s Day by wearing clothing in light blue, as Her Majesty the Queen’s birthday was on a Friday and the color of Friday is light blue. Traditionally, children offer their mother jasmine flowers, which symbolizes motherhood. Which country’s tradition are you choosing to celebrate? BAMBI mommies, let’s send our appreciation to our mommies and celebrate ourselves as well!! Happy Mother’s Day Thailand!   Sincerely, Akiko   View PDF Tags:
2018, PDF